This week, we brought in Dance Dance Revolution (DDR) into our classroom as a class reward for our Intermediate students as well as for our daily physical activity (DPA) requirements.

We’ve been thinking about bringing in Dance Dance Revolution into our classroom since last summer, but didn’t actually start to research specifics and the benefits of having DDR in our school until October.

Although we’ve used Dance Dance Revolution in our programming before at a teen drop-in center / community center, yesterday was the first time we actually played DDR with our students in school.

Dance Dance Revolution is a music video game where players move on a dance platform and score points by stepping on the correct arrows on the dance mat by watching the screen and listening to the music.

In Dance Dance Revolution Hottest Party for the Nintendo Wii, the background visuals zoom in and out on the ensemble of dancers, but players are focused on the column of dance moves floating up the screen. (It’s like Guitar Hero or Rock Band, but with dancing.)

We brought in Dance Dance Revolution for our students as a class reward, but also to see if it would work as DPA (daily physical activity).

We ran the DDR game as a competition. Students were randomly placed in order and played against each other four at a time. The top two students progressed to the next round. Everyone “had” to play, but towards the end, only one or two reluctant students still had reservations about playing. Most other students seemed to get into it.

What’s the benefit of using Dance Dance Revolution in the classroom?

It’s a high-interest, low-skill physical activity that appeals to the video game generation and has caught the attention of some teachers for the following reasons:

In our Gr 7/8 classroom, we projected the Wii Dance Dance Revolution game onto the wall and played the music through our stereo system. We had four dance mats (one wired mat and three wireless) and both the original and the sequel Hottest Party Wii DDR game.

We teach using a data projector so we’ve already permanently set up our digital projector to our computer. The LCD projector sits on top of our filing cabinet and we’ve taped white paper onto the wall to create a giant 8 foot by 12 foot screen beside our blackboard.

We’ve also created podcasts in our classroom using audacity, so we had already brought in an old amp and sound system to hook up our computer to.

All we had to do was bring in a Nintendo Wii, the Dance Dance Revolution video game, and four mats and we had an instant class party / DPA activity.

We used a combination of Shoppers Optimum points and PC points to save up enough money to buy a Nintendo Wii. We’ve also generated around $100 from advertising revenue from this website which subsidized the purchase of two wireless dance mats.

How to use Dance Dance Revolution with students

There are several different ways you could use DDR.

Here are some things to know about running a DDR competition with your students:

Dance Dance Revolution did get kids active to some extent when they were playing. Most students stood around watching when it wasn’t their turn. Only a few students were practicing to step in-sync with the game, even if they weren’t on the dance mat. 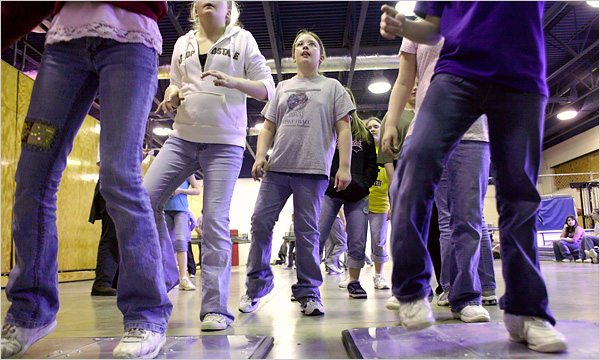 To do DDR as part of an extra-curricular or daily physical activity program, you would have to get the other students practicing while waiting their turn to be on the mat.

Some students were good because they were natural athletes. Some students who you wouldn’t think of as being very active or into sports, turned out to be quite good at DDR, either because they owned the game at home or because they played a lot of video games and could time their movements better than the other students.

By the end, a few kids were shy and still didn’t want to play. Other kids who were shy did end up playing and enjoying the game.

Concerns with Dance Dance Revolution in the Classroom

Branding of the classroom

We live in a digital age. Our students are digital natives born into this digital culture; the teachers are digital immigrants who are learning to become digital.

Dance Dance Revolution won’t replace intramural or competitive sports at your school, but it might be a way to hook in the video-game crowd into a more active lifestyle.

What are your thoughts on using games like Dance Dance Revolution in the classroom?

This site uses Akismet to reduce spam. Learn how your comment data is processed.

I use Dragon Professional 15 (OFFICIAL WEBSITE) to write documents and dictate blog posts.